Kelvin and Anabel Davidson have been together since 2005, sharing their passion for diving and adventure.

Born 8 years before her future husband in Cebu, Philippines, Anabel initially worked as a company accountant before moving into the world of personal training and teaching aerobics. A four-year stint at Gold’s Gym in Doha, Qatar introduced her to BSAC club diving, and would lead her into the world of professional diving.

Born on a little patch of antipodean paradise called New Zealand, Kelvin grew up in and around the ocean, where he first developed a passion for freediving before moving into SCUBA diving. A varied professional background in area’s as diverse as Fitness Trainer, Commercial Fisherman, Public Accountant, Company Director, and several years as a Nightclub Bouncer, make for a few interesting stories and humorous tales, and give him a fairly well-balanced outlook on life.

Anabel moved back to the Philippines in 2002 to teach diving in Puerto Galera, Kelvin moved to Puerto Galera in 2004. We met while working with the excellent folk at Asia Divers and Tech Asia, where we spent 4 great years exploring the depths of the Verde Island Passage. Spare time was spent visiting the WWII wrecks of Subic Bay and Coron in the Philippines, and trips further afield to the South China Sea, and the Force-Z wrecks HMS Repulse and Prince of Wales.

From 2008-2010 we managed the Truk Lagoon Dive Center and spent 3 years teaching Technical, Trimix, and Wreck programs in the world’s biggest and best wreck diving playground.

During this time a few sneaky cave diving trips to Mexico were made, leading to a permanent move at the end of 2010. Since then, we have made a home in Tulum, on the Mayan Riviera, where we have worked to bring our passion for cave and technical diving to those who want to share it with us.

For years we have been active dry cavers, and have spent many months wandering the jungles of South East Asia (Malaysia, Borneo, Thailand, Cambodia, Vietnam, Laos, and Philippines) in search of underground adventures.

When not working, we can often be found in the gym trying to move heavy things around or strolling the Caribbean coastline of Tulum and the Sian Ka’an Biosphere with "Buddy", the worlds cuddliest English Bull Terrier.

We practice what we preach and endeavor to travel and dive for ourselves as often as possible, with wreck diving trips back to Truk Lagoon and cave exploration with the Asian Karst Exploration Project in the Philippines, as well as locally with the Tulum Underwater Explorers family.

Anabel is “She Who Must be Obeyed” and runs both our Tulum and Cozumel diving operations.

Kelvin has been teaching technical diving since 2005 and has more than 8000 logged dives. He is a passionate and thorough educator who teaches from a broad base of experience, and whose calm, relaxed and supportive style puts students at ease, bringing out the best in them.

Ivo Chiarino is a cave instructor born and raised in Barcelona, Spain. He found his passion through his family who introduced their love of aquatic environment at age 6 through his first diving experience. As Ivo continued to explore the underwater world his curiosity grew, and he later found himself pursuing a professional career in diving education. Ivo began working seasonally in the Canary Islands for four years to further develop essential skills until he decided he was ready for a new environment and moved to Akumal, Mexico in 2015. His passion for diving quickly shifted into cave diving as he discovered the Quintana Roo cave systems. Ivo’s main goals as a dive instructor are to educate divers on how they can remain safe, promote conservation, and enjoy their exploration through their diving adventures. Joining the Third Dimension Diving family has been a pivotal point in both Ivo’s personal life and career as he is surrounded by like-minded, kind, and equally as adventurous friends.

Ivo teaches in Spanish, Catalan, English, Italian, and gets by in French.

IANTD and TDI Instructor for:

Better known as Gio, he discovered his passion for caves while spelunking in his home country, Brazil. At the time he was working in management consulting for one of the biggest companies in the USA, and finishing up his MBA. Whenever he could, he would escape and travel around, explore the ocean, caves or hikes. At some point he realized that those little breaks away from reality could become a full time lifestyle and took the plunge to became a dive instructor.

He moved to Dominican Republic where he did his first cave course and worked as an instructor/guide in a resort. This only made his love for cave and deep diving grow to a point where he needed to move to Mexico to further his knowledge and experiences in diving. Once in Mexico, he worked diving in Playa del Carmen, Cozumel and Tulum, before he finally met Third Dimension Diving.

Now Gio is an IANTD IT and is part of the Instructor Development team at 3D. He also runs the 3D Service Center and is somewhat of a maestro when it comes to drysuit repairs. Gio lives in the jungle with his dog Pec-ha and they are always in the water, either diving, swimming in the Cenotes or crossing waves in the ocean. Gio teaches in English, Portuguese, and Spanish.

Giovanni is a GUE Cave and Technical Diver

IANTD and TDI Instructor for: 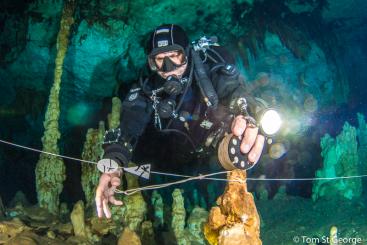 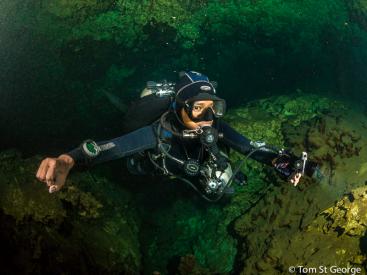 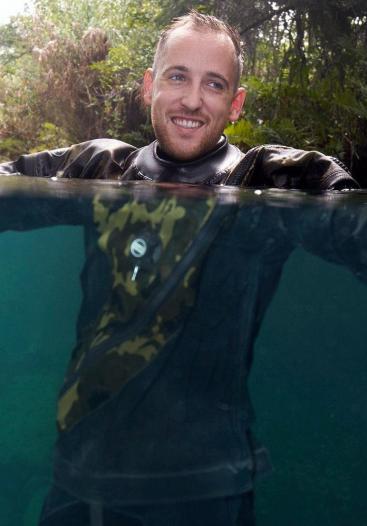 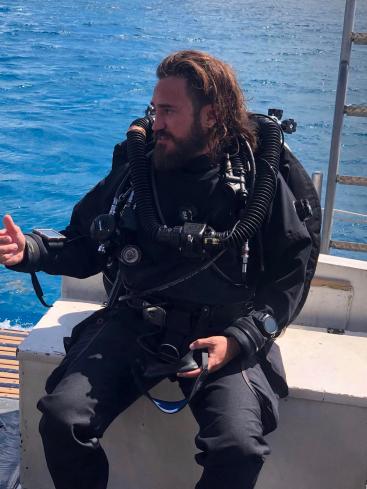